Gallery of Warsaw personalities of culture of 20th Century

2020 marked the 10th anniversary of the opening of the 20th century Warsaw Cultural Personality Gallery in Warsaw, which was created by Piotr Janowczyk in 2010. At that time, a series of large-format portraits of outstanding representatives of the culture of the 20th century Warsaw was created. Their images installed as part of the Street Art Doping Festival, which took place at that time, became an opportunity to emphasize the role played by outstanding Warsaw artists, whose life and work were related to Warsaw and influenced not only the heritage cultural heritage of the 20th-century capital but also the importance of Polish culture on the European scene.

During the 10 years of its existence, it has become a permanent element of the urban fabric and has become a recognizable testimony to the cultural heritage of the capital. It was created in 2010 as a series of large-format urban portraits and it should be included among the important examples of Polish art close to muralist trends. It is also probably the only example in Poland of a large-format portrait gallery presenting artists from 20th century Warsaw.

However, the time has done its job and the gallery, which is located at al. Armii Ludowej on Trasa Łazienkowska downstream of the Central Statistical Office has in recent years been eligible for dismantling or a complete renovation.

On behalf of the Foundation, in 2020, Piotr Janowczyk undertook the task of renovating the gallery, consisting of recreating all the paintings and producing a short documentary about the history of the gallery. As part of the ongoing renovation, the damaged and corroded portraits were recreated in a monochrome version. Empty niches will also be completed in the gallery, with missing images and visual identification in the form of information boards. 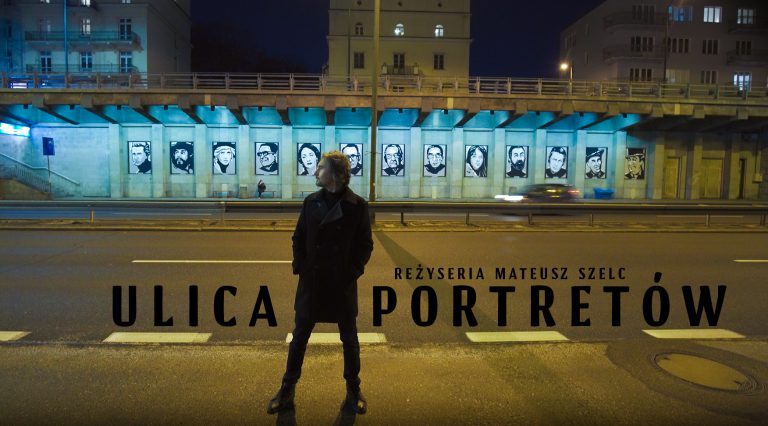 “STREET OF PORTRAITS” – documentary film
A short documentary directed by Mateusz Szelc was also produced, presenting the history of the creation of the Gallery of the Portrait of the Cultural Personality of Warsaw of the 20th century. The film consists of archival materials, interviews with the creators and documentation of works related to the renovation of the gallery.

The film records conversations with the author of the portraits, Piotr Janowczyk, and the Warsaw fashion designer Grażyna Hase, whose portrait was one of the last to be included in the series in 2020. The film also shows under what circumstances the project, which was supposed to be a temporary exhibition, permanently entered the fabric of the city.

PIOTR JANOWCZYK – visual artist and art historian. He manages the Image Registration Workshop of the University of Warsaw and the Illustration Studio at WSISiZ. In the past, he was associated with the Academy of Fine Arts in Warsaw and the European Academy of Art. As a guest conductor, he conducts a series of lectures on the history of visual culture, which were released on the radio in TOKFM. Author of over 30 large-format portrait murals made in Poland and Europe. Including the Gallery of Cultural Personalities of Warsaw and the Portrait Gallery in Krakow’s Kazimierz. In 2011-2017, he traveled around Europe, implementing the project “Street Art Summer”. Director of short film and animated forms in which he explores the issues of sequential movement. TEDx 2017 speaker.